Joe's in the Hall and the brainwahing continues

The College Football Hall of Fame has changed its rules for induction. Previously only retired coaches could be elected into the Hall, but now, any coach over the age of 75 is eligible. So, guess who is in the first class of inductees since the rule change? Yup, Joe Paterno.

As far as the brainwashing goes - Katie's mom told me a great story. After the Kentucky Derby, the Philadelphia Inquirer had a big picture of Barbaro on the front of the sports section. Amy, the 2 year old, LOVES horses and wanted the picture - so Kelly cut out the picture and Amy was running around with her "horsie" - Katie, never one to be left out of the fun, complained to her mother that she wanted a "picture" also. 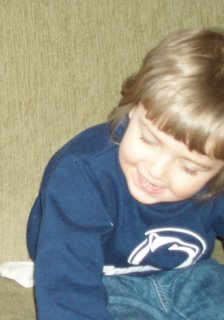 Tired, she cut out the other "big" photo on the front page, which happened to be a picture of Joe Paterno (having just been elected in to the Hall) - apparently Katie ran around their house touting the greatness of "my Joseph" and the picture was later found tucked safely into one of the family beds. When asked if she was "going to go to Penn State for college" Katie replied "No, I'm going to go with Madeline" - she was then told, "well, that's were Madeline went" so then it was okay. It's working!!!!
Posted by PSUgirl at Wednesday, May 17, 2006