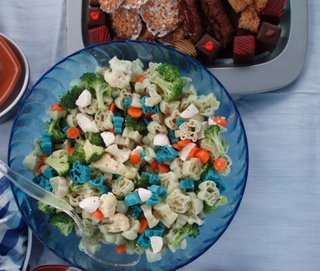 We served sausage scallopini (yum!), penn state pasta salad (in all honesty, the blue noodles were freaky
- I don't think I'll be getting this again), garlic crescents; mini pizza bread; pizza bread; assorted meats and cheeses; grilled garlic kielbasa; assorted cookies/pastries from a local italian bakery; cannoli; sweet potato pie; hot cider with spiced rum (a combination which we found out, thanks to the internet, is called a "broken leg" in the world of cocktails - since the tailgate was in honor of coach paterno - this was an easy choice); and, chips, crackers, beer (paulander pils), hot drinks, etc. 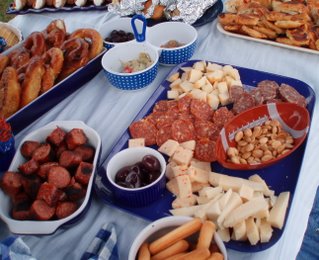 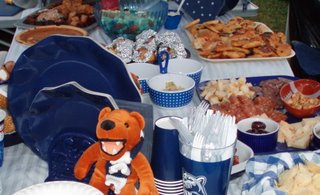 The funniest moment of the day was early on, while we were still setting up. I was sitting down, arranging the cookies on a platter when suddenly, out of the corner of my eye I see something hit the ground and splatter up toward my leg/boot - simultaneously I hear shouting and laughter - My first thought was "why the heck are those kids playing water balloons?" - it wasn't a water balloon - it was an egg - and it had hit me. After 30 seconds of confusion - I come to understand that, for charity, 2 kids are going around the parking lot "selling" eggs and letting "you" throw them at them. The young lady was wearing a clear trash bag and a bulleye on her torso with "MSU" written across it (Target Girl) - Apparently a gentleman 5 CARS DOWN THE HILL had purchased one such egg and so egregiously missed the mark that it flew up to our spot, and my pant leg. Much hooting and hollering could be heard from their tailgate - and, by the time the purveyors of eggs reached our spot - I had already told Suzanne - "I'm getting an egg" - a look of wicked childhood glee crossed her face (one reserved for 2nd and middle children) - By this time the young man who had thrown the egg had come up to apologize - I gave him a friendly pat on the shoulder and said "Don't worry about it. I'm getting an egg". To make the story a little bit longer - I did buy an egg (from Money Boy) - and target girl obligingly stood in front of me as I lofted my egg (pre-cracked - a tip from Money Boy) into the air - for the second time in my life the winds of the gods of fair play guided my projectile to its mark - and I hit the kid right on the numbers of his jersey - the egg bounced off his belly and smashed to the ground. Cue eruption of laughter. I think the kid was surprised that I actually threw it at him - which was odd, because I told him I was going to.
Posted by PSUgirl at Wednesday, November 22, 2006